Incentives For Investing In
Accommodation For
Cricket World Cup 2007 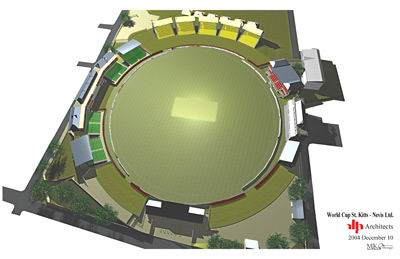 Lawmakers will meet on Thursday to debate the Cricket Cup Tourism Accommodation Incentives Act, 2005, which encourages the construction of suitable accommodation in anticipation of the demand for housing for the matches to be staged in St. Kitts.

Minister of Industry and Commerce, Dr. the Hon. Timothy Harris is expected to get the green light from all sides of the National Assembly for the draft legislation.

Draft legislation also provides for the Cabinet by an Order published in the gazette to revoke or suspend the first mentioned Order, the suspension of all reliefs or exemptions and the payment to Government of the amount of any relief or exemption already received.

Construction of the redevelopment of Warner Park is being financed by the Republic of China on Taiwan.

St. Kitts & Nevis will host the Australian cricket team and teams from three other nations in the first round of the 2007 Cricket World Cup.

Warner Park is said to be the only cricket ground in the region ahead of schedule.

One Day International and Test Match slated for St. Kitts and Nevis in 2006

Photos of Warner Park before redevelopment