North Frigate Bay...
Most Scenic of all St Kitts Beaches?

The question of whether the beach at North Frigate Bay is the most scenic of all St Kitts beaches is a tough one, ... one that I'd rather not answer at this point.

In fact I think that I will leave that for you to decide after you have browsed through the pages of Discover St Kitts Nevis Beaches.com. What I do know though is that of all the St Kitts beaches, North Frigate Bay has attracted most of the hotel, resort and condominium development to date. North Frigate Bay is located on the Atlantic or windward coast of St Kitts, thus the waters at this beach tend to be rough. The beach however offers a challenging swim for those who enjoy swimming in brisk waters. Productive reefs are located off the coast of this St Kitts beach. 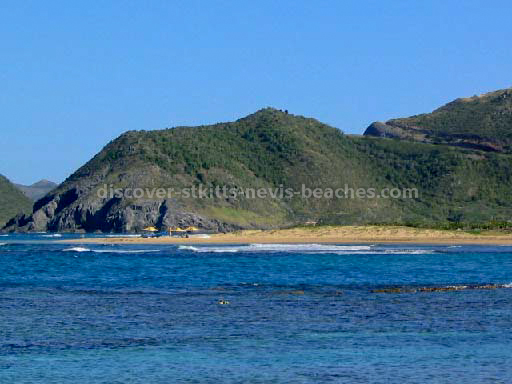 I can recall back in the early 1970's when there was little or no development on St Kitts beaches including the beach at North Frigate Bay. At that time, just about all of the beach front at North Frigate Bay was covered with sea grape trees, grass and other vegetation that normally grow on sand dunes. During the summertime, many locals would visit the St Kitts beaches in the Frigate Bay and Conaree areas to pick their share of the juicy sea grapes. 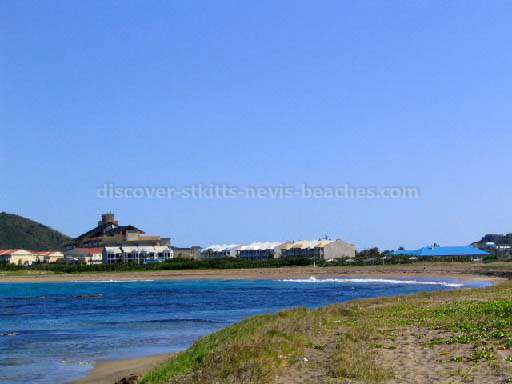 Today, some 30+ years later, the landscape at North Frigate Bay and some other St Kitts beaches has changed.

If you wish to dine at one of the establishments along the strip at North Frigate Bay, you will have a wide choice of restaurants and cuisines to choose from. At the St Kitts Marriott Resort alone there are six restaurants on site.

Although there is an 18-hole championship golf course located just opposite the beachfront at North Frigate Bay, it is not all about hotels, condominiums, restaurants and the like.

Now, let's get back to the question at the start of this page. Is the beach at North Frigate Bay the most scenic of all St Kitts Beaches? Please feel free to let me know what your thoughts on this are by completing the form on my Questions page.

PJ's Bar and Restaurant closed its doors in 2011 after being in operation for 24 years.

A new condominium resort complex, Ocean's Edge Resort, is being constructed next door to the St. Christopher Club Complex. The groundbreaking was held in January of 2006. A number of hillside villas and beachfront condominiums have already been constructed.