Looking for Photos of the 2004
St Kitts Triathlon Winners?

Local Athletes to Keep Your Eyes On 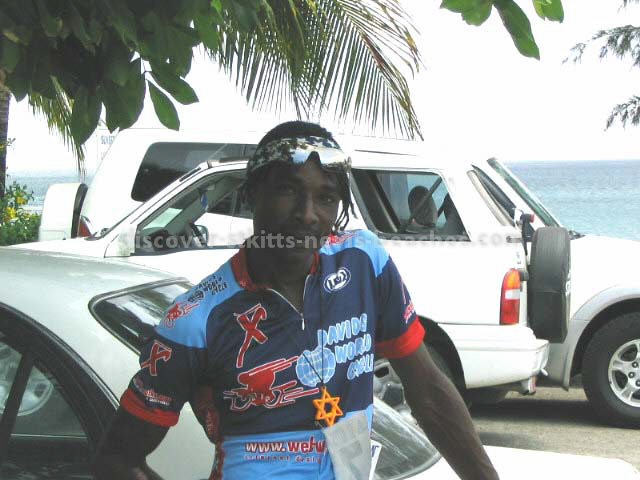 A local athlete with tremendous potential is Lesroy "Snake" Queeley of Palmetto Point. Lesroy competed in the St Kitts Triathlon along with team members Jen C (swim) and John Francis (run). The team placed second in the Olympic relay, coming in a mere 30 seconds behind the first place finishers. This is particularly interesting since the swimmer for the winning Grenadian team came out of the water some 4 minutes and 42 seconds ahead of Jen C. But after a remarkable bike by Snake, the local team was able to narrow the Grenadian team's lead after the swim and bike to a mere 6 seconds. His time for the bike course was 93.14 minutes (giving him the #1 ranking in the bike course for the Olympic relay) compared to 97.50 minutes for his Grenadian competitor. Snake's bike time was the second best time in the Olympic race. It is therefore fitting that I feature Lesroy "Snake" Queeley on this page displaying photos of the 2004 St Kitts Triathlon winners. 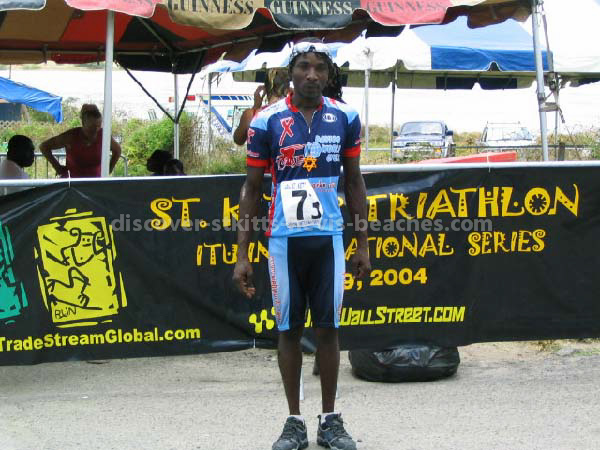 I spoke to Snake at length after the race to find out how he was able to accomplish what he did. In response he told me that he trains very hard just about every day. In addition, he rides his bike to and from work (from Palmetto Point to Ottleys and back) everyday. When I asked him how long it took him to ride to work, I discovered that the journey took about 25 minutes. Amazing isn't it? I say that because that's about how long it would take me to do the journey by car, if the traffic is good. Snake has his sights set on competing as an individual in the St Kitts Triathlon in the future, and eventually to compete professionally. I am of the firm view that he possesses the strong will and focus to go after his goal. 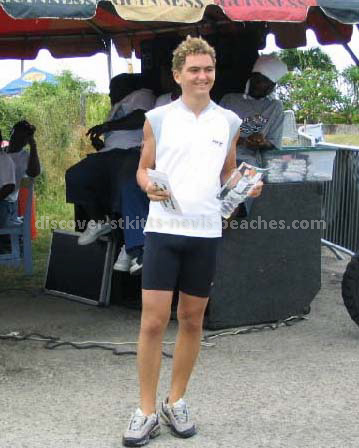 Youngster Ninian Cameron-Blake is another local athlete to watch. Ninian placed third in the 2004 St Kitts Triathlon sprint race and was adjudged the Junior Sprint Champion. He ranked #2 in the 750K swim and 20K bike with times of 12.42 minutes and 56.02 minutes respectively. Ninian is the son of well known artist Rosey Cameron Smith of Spencer Cameron Art Gallery. Rosey is internationally known for her Carnival figures and her work has been exhibited in art galleries in Europe and the United States.

Click on the thumbnails below to enlarge the photos

Visit the Nevis Olympic Triathlon page and the Nevis Cycle and Triathlon Club web site for information about cycling events in Nevis.