Kittitian Heights Resort to be
Constructed at Belmont Estate 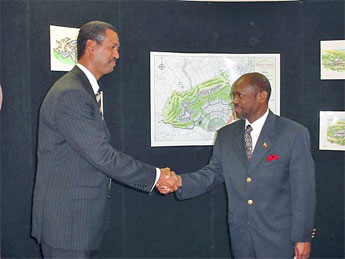 Managing Director of Belmont Resorts Limited, Mr. Valmiki Kempadoo said following the signing of the Agreement with St. Kitts and Nevis Prime Minister and Minister of Tourism, Dr. the Hon. Denzil L. Douglas, that the developers “have a tremendous amount of confidence in the Government and the positioning of St. Kitts and the project is worthy of this investment.”

The project will comprise a five-star 160-room hotel, three condo clusters with a total of 440 rooms and 100 luxury villas.

“Construction is to start in six months. This facility will add an additional 1,000 rooms and when fully build out in six years from the start of construction, will provide 1,000 jobs between the construction phase and the operational phase,” said Kempadoo, who added that when completed it will be a landmark resort for St. Kitts and the Caribbean. “It will be a model resort development for this region.”

He said the core of the project is the Artists Village. “The inspiration came from The Circus in Basseterre. It is going to have shops, restaurants, cafes, entertainment and that we see as the hub of this resort development. That will define the development,” said Kempadoo, who said the nearby Art Gallery on the second floor will attract local, regional and internationals artistes on an Artists Residency Programme. “We will embrace not only fine art, but also the performing art as well as music to encourage interaction between locals and visitors.”

The Boutique Hotel will consist of several small cottages similar to the exiting plantation resorts on St. Kitts.

Kempadoo said that with St. Kitts positioning itself as a major attraction for the Music Festival, negotiations have begun to establish a Recording Studio similar to the one that operated in Montserrat.

“We hope to attract well-known artists from around the world to stay at Kittitian Heights and record their music. It will also be available by local and regional artistes,” said Kempadoo.

Referring to the St. Kitts-Nevis Labour Party’s Manifesto for the 1993 and 1995 General Election, Prime Minister Douglas noted the promise made to diversify the economy of the twin-island Federation.

“We said then that we were not only going to concentrate on the South East Peninsula. We said also that we were not going to forget the people who are living on the Northwestern tip of this country. The people who for centuries have made a very humble living from working the land. We have had to move on from sugar agriculture, which provided the livelihood of these people for all these years,” said the St. Kitts and Nevis leader.

Dr. Douglas pointed out that some of the sugar lands were being used for a different form of development and the land must continue to provide a livelihood for the people of that part of the country.

“The land that is earmarked for development today has been preserved for the people by former administrations and it continues to be an integral part in the development of the people,” said Prime Minister Douglas, who said his Administration is mandated to “improve the quality of life of our people.” 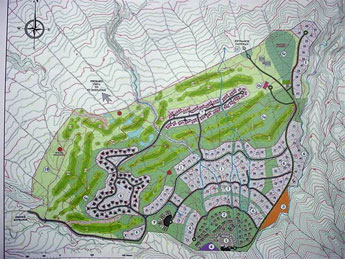 The Layout of Kittitian Heights

“We want to move beyond the mere subsistence from sugar agriculture. We want to move into another and new exciting economic activity which is being spurred on by tourism and hospitality services,” said Dr. Douglas, who made a very strong appeal to people to recognise that this is the time to acquire new skills that can be used and sold and applied in the new economy that is being created in St. Kitts and Nevis.

“I make a strong appeal to my own people in the villages of St. Paul’s, Newton Ground, Saddlers, Parsons, Dieppe Bay and who live in smack center of this new activity that is about to be unfolded here, to make use of the opportunities that are being provided,” said Prime Minister Douglas.

Dr. Douglas said: “This project is not for me. It is not for my Government. It is for you the people and as a result of that, the people must prepare themselves to take advantage of the development which is being brought to this particular area.”

Prime Minister Douglas, who is also the Parliamentary Representative for the area noted that the tourism development is taking place above Belmont Estate.