In this article on green cruises, freelance writer Laura McCann looks at cruises to the Caribbean and highlights the green initiatives taken by major cruise lines that offer cruises to the islands.

How Green Are Cruises to the Caribbean?
by Laura McCann

Next time when you want a green holiday, don’t be reluctant to go for a green cruise! There was a time when cruise ships sailing in the Caribbean were some of the worst vessels when it came to minimizing the impact of sailing, in regard to eco-friendliness. Companies have been accused of dumping garbage, grey water, untreated bilge and who knows what else into the sea without considering the consequences. Their carbon footprint was huge because there was no major effort to save energy. Well, over the last 10 years that has all changed! Due to new regulations enacted by the US and countries in the Caribbean, many of the practices noted above are no longer allowed, in any ship that docks in the US or Caribbean ports. So just how are they doing it? Following is a list of major cruise lines and ships with start points in the US and San Juan, PR that sail to the Caribbean, and what they are doing to become green cruises.

According to the environmental group Oceana, the average cruise ship produces a large amount of pollution every day, with over 160,000 gallons of sewage from sinks, showers, and toilets, or 7 tons of other waste, among others.

Towards Green Cruises: Recycling and Incinerating

There was a time when cruise ships just dumped all their garbage overboard. This garbage included things like: plastic cups, plastic silverware, Styrofoam, cooking oil, mattresses, televisions, and the list goes on and on.

Today things have changed. All the major cruise lines to the Caribbean, including Norwegian Cruise Lines, Royal Caribbean, Celebrity Cruise Line, and Princess Cruises incinerate all the garbage that regulations allow them to and recycle any solid waste that can’t be incinerated by offloading this waste for disposal. 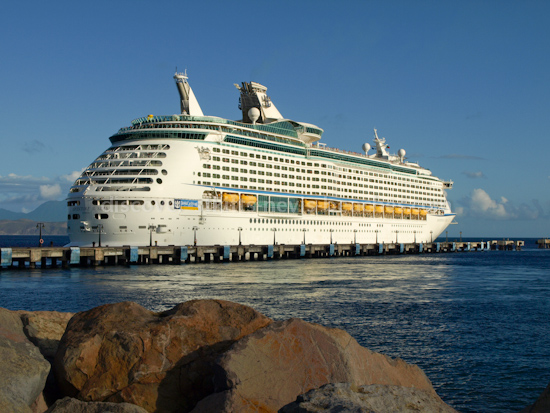 Adventure of the Seas at Port Zante

Norwegian Cruise Lines has partnered with an organic farmer in Miami, to recycle some of their cooking oil.

The oil is turned into a biodiesel and reused on the ship or burned in cars, trucks, and farm equipment in the Miami area. Biodiesel releases less carbon dioxide than regular diesel, and since this is made from used cooking oil it doesn’t take food from the food chain. In one 3 month period in 2008, they recycled 45 tons of cooking oil: that is enough to fuel the average family car for over 475,000 miles! To date they have delivered more than 500,000 gallons of cooking oil to facilities in the US to be converted to biodiesel.

Some major cruise lines have also installed water purification systems to clean wastewater to near drinkable cleanliness. While it is not drinkable, it is clean enough by EPA standards to be discharged into the sea. They have also built a wastewater water purification plants on the islands they own, as well as implemented new recycling activities.

In August, 2011 NCL announced a partnership with NextEra Energy Resources the largest producer of wind and solar power in North America. The initiative allows guests on NCL cruises to contribute $10.00 per person, per cruise through NextEra Energy Resources EarthEra Renewable Energy Trust when they book their cruise online. The trust will use 100% of the donations to build new renewable energy resources across the United States.

Royal Caribbean’s latest addition to their fleet the huge Oasis of the Seas (5400 passengers) uses state of the art liquefied natural gas to power the engines and are equipped with scrubbers that eliminate SOx emissions, reduce carbon dioxide by more than 20%, and reduce NOx emissions by over 80%. The Oasis of the sea requires 25% less power than smaller but similar cruise ships. The ship also processes all of its wastewater onboard to standards clean enough to discharge into the sea. 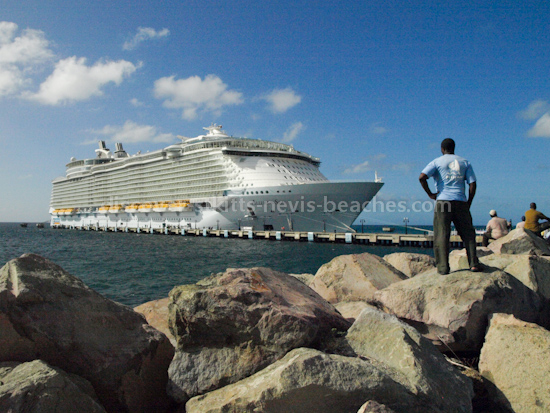 Allure of the Seas docked at Port Zante

Towards Green Cruises: More Recent New Initiatives by all the Major Cruise Lines

Are you wondering which ships use the latest green technology for cruising the Caribbean?

Laura McCann is a freelance writer specializing in green technology and eco-tourism. When not writing, she is conscious about offsetting her carbon footprint and taking her dogs for long walks in the woods where she helps plant trees.

I hope you enjoyed Laura's article about green cruises. If you did, please feel free to share your thoughts about the article in the Facebook comments box below.